Humanoid robot with this complexity is unparalleled, says ASU expert

To kick off the new year, Boston Dynamics posted a video of four robots doing a choreographed dance to the Contours’ "Do You Love Me." It’s garnered about 25 million views on the YouTube channel alone.

In a time when we all need something to smile about, the dancers have inspired lot of guessing about how the choreography was accomplished.

It wasn’t CGI, as many viewers speculated. And it wasn’t the hand-coding of traditional robot programs, either.

According to Arizona State University's Heni Ben Amor, an assistant professor in the Ira A. Fulton Schools of Engineering who specializes in machine learning and human-robot interaction, the technology involved is not new.

“However, Boston Dynamics has taken this technology and the underlying methods to new heights,” Ben Amor said. "In combination with the artistry of the choreography, this results in an impressive showcase of robot capabilities.”

A critical challenge is maintaining balance.

“There are a lot of explosive motions in the dance,” Ben Amor said. “Arm movement in the air may be easier to orchestrate than landing on one leg, but that arm movement generates momentum that affects landing. Does the floor have some bounce, or is it rigid?”

These are the kinds of assessments the robot is making as it goes through the routine, making 10 or more environment interaction predictions per second, he said.

“One mistake and a very expensive robot can crash.”

The routines likely were choreographed and performed by dancers, who worked with the roboticists to make adjustments to the movements that remained within the robots’ capabilities, Ben Amor explained.

While the mimicking of the dancers’ choreography has an element of puppetry, maintaining physical stability is part of the equation. “The robot has to think about how to actuate the motors so it can generate its own actions in space.”

Ben Amor emphasizes that the robots were not hand-coded to perform the exact same routines again and again. More specifically, the robots use a technique called model-predictive control to ask many “What if?” questions. Control signals are then chosen to maintain balance and stay as close as possible to the original choreography.

“Where normally a human head would be, you can detect 3D cameras,” Ben Amor said. “The cameras are providing that environmental data to the robots. The cameras, along with gyro-sensors, help the robot execute the routine as choreographed.” 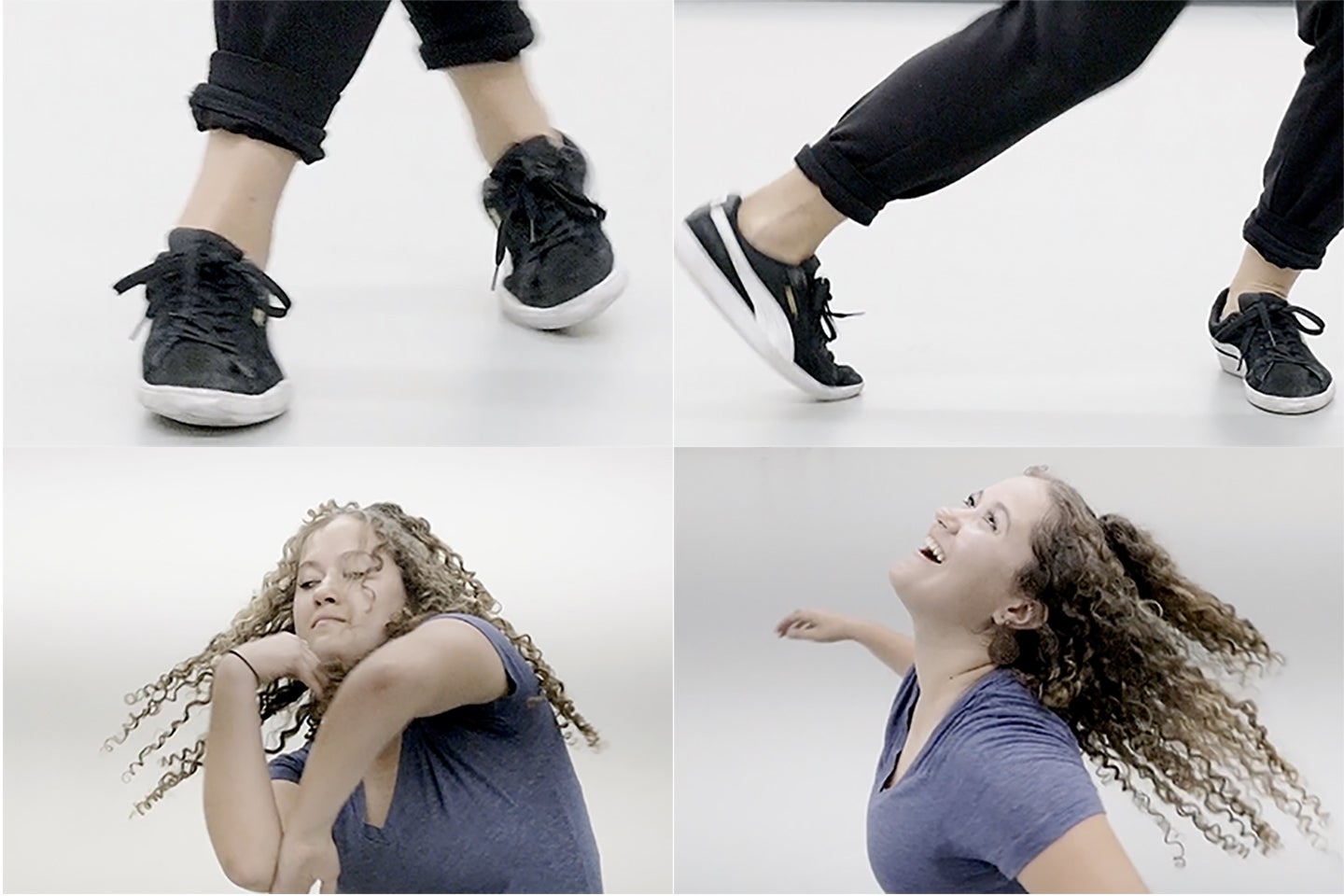 While the robots are able to produce the choreography, it’s not what we traditionally think of as AI, he added.

“They aren’t making long-term autonomous decisions. They are making short-term decisions that enable them to reproduce what they’ve been shown in the space in which they are acting.”

And though the robots’ performances are definitely captivating, they won’t be choreographing their own recitals any time soon – or applying these skills in a surgical theater, for example.

“Even without any learning or AI, it is still difficult to overstate the quality of this achievement,” Ben Amor said. “A humanoid robot of this complexity, being controlled with this level of fluidity and grace, is unparalleled.”

There will come a time when robots can make the kinds of split-second decisions necessary to handle the challenges of assessing a surgical situation and adjusting actions accordingly. But for now, they don’t have the cognitive skills.

“Even making breakfast is a challenge at this point,” Ben Amor said. Steps like knowing eggs are needed, finding and retrieving them from the refrigerator and choosing the cooking process and equipment, are the kinds of decision-making skills that remain part of the ongoing research process.

“At this point, machine learning is at the stage where Netflix algorithms let the 'recommendation robot' evaluate the movies you are streaming to suggest what might next be on your viewing list,” he said.

However, much more research needs to take place before machine learning finds a larger foothold in the field of robotics.

Ben Amor also advises that household robots will likely look nothing like the Jetsons' Rosey the Robot. In our homes, legs are so much more useful than wheels. Even vacuuming robots cannot navigate stairs.

“The future robots assistants we have in our homes will likely be of human size and shape,” he said. “They will manipulate door handles and stairs, seamlessly make the transition from tile to carpet, and perform dozens of other actions that, as humans, we do without consciously thinking about them.”

But there are psychological considerations to giving robots humanoid forms.

“People have an emotional response when robots seem like zombies,” Ben Amor said. “Sociologists and psychologists are researching whether it’s better or worse for a robot to emulate breathing and eye blinking behaviors, for example.”

But he believes that ultimately, people will begin to feel comfortable with realistic, humanoid robots.

“Disney has been using realistic animatronics in theme parks for decades and they aren’t threatening,” he said. “Now they are adding robots that aren’t confined to a ride. Children will be able to have physical interactions with Buzz Lightyear and Olaf from Frozen.”

Ben Amor points out that Disney "imagineers" are developing “Stuntronics” for theme park rides and attractions.

The focus of Ben Amor’s research is machine learning methods that enable physical, human interaction. “I envision that the next stage will be developing stunt robots capable of directly interacting with humans.”

ASU Legacy Scholar and 2017 alumna Nicole Evans says Arizona State University felt like home the moment she walked on campus in 2010 for the first time.  “I was only a freshman in high school that year touring colleges with my sister, who was a senior,” Evans said. “It was the only tour where you could feel how much the students loved being there, and I wanted to be part of that.”A few ...

ASU Legacy Scholar and 2017 alumna Nicole Evans says Arizona State University felt like home the moment she walked on campus in 2010 for the first time.

“I was only a freshman in high school that year touring colleges with my sister, who was a senior,” Evans said. “It was the only tour where you could feel how much the students loved being there, and I wanted to be part of that.” Nicole Evans stands with her family at her graduation in 2017. Download Full Image

A few years later, Evans became a Sun Devil herself, following in her sister Donna’s footsteps. She received a Legacy Scholarship from the ASU Alumni Association, which provides financial support for relatives of ASU graduates. Her sister was the first person in her family to graduate as a Sun Devil.

“The Legacy Scholarship helped propel me to do things I had never done and did not think were possible,” she said. “The word ‘legacy’ in general carries a substantial weight for me.”

By earning her degree at ASU, Evans carried on her own family’s tradition. She comes from generations of family members who completed some historic “firsts,” and she has always been compelled to continue building on that legacy.

For Evans, being the first person — and woman — in the family to be in the construction industry is a point of pride, and she hopes her accomplishments inspire her younger cousins to work hard and pursue their dreams.

“Since Donna’s graduation, my godbrother and I graduated from ASU, and we both hope to continue the tradition with the next generation,” she said.

In addition to studying and working at an internship during her time as an undergraduate student, Evans also played an active role in the ASU community. She served in various leadership positions with the Student Alumni Association (SAA) and eventually became the student organization’s president. She describes her college experience as cinematic due to her involvement in SAA.

One of her favorite college memories was planning and participating in an SAA event for the children of ASU alumni.

“There was something special and nostalgic about watching future Sun Devils grow up, climbing ‘A’ mountain, and taking part in the first ASU tradition of their own at Finger Paint the ‘A,’ ” she said. Nicole Evans and her family stop for a pitchfork picture with Sparky after painting the "A" on "A" Mountain gold at a previous Echo from the Buttes event. Nicole Evans helps a young Sun Devil paint the "A." While marching in a homecoming parade with a local elementary school class, Nicole Evans sings and claps to the fight song.

Evans studied construction engineering in the Ira A. Fulton Schools of Engineering and was an honors student.

“My ASU experience was truly something I will never forget,” she said. “I had the privilege of being a student within Barrett, The Honors College, which pushed me to be a global thinker.”

During her freshman year while she was coordinating a community service event for Advancing Women in Construction, Evans met a volunteer who recommended her as an intern to her first employer. She held the internship with this company throughout her time at ASU, and Evans then continued working with them upon graduation.

“I spent the first several years of my career working for a commercial general contractor that specialized in gaming and hospitality as a project engineer,” Evans said. “In this role, I was able to work in well-known and historic locations with high-end clients such as Caesars Entertainment in Las Vegas, Salt River Pima-Maricopa Indian Community in the greater Phoenix Area, and Carnival Cruise Line in Southern California.''

After five years with that first company, she was ready to take the next step and become a senior project engineer with Oltmans Construction Co. in Las Vegas. Evans says her career in construction continues to be exciting due to the ever-changing nature of the industry.

The Legacy Scholarship is accepting applications through Feb. 26 for the 2021–2022 academic year.