David Freedman’s entrepreneurial journey spanned a wide range of experiences at Arizona State University. He went from selling T-shirts at Sun Devil Stadium as a student in the early 2000s to winning the 2020 Sun Devil 100 award for having the fastest-growing business created, owned or led by an ASU alumnus.

“I’m from Philadelphia and people who know me know I have a lot of Philadelphia pride, but now I call Phoenix home and that all started with ASU,” Freedman said during the Zoom celebration.

“W. P. Carey is what drew me to Arizona State and the Palm Walk definitely did not hurt either, coming from the East Coast.”

“None of this is possible without ASU and the incredible community that’s been built here,” Freedman said.

This was the fifth Sun Devil 100 event, and the first year that a full 100 companies were eligible to be honored by the ASU Alumni Association. All nominated firms have to have been in business at least three years, have annual revenues of at least $250,000 and be founded or led by an ASU alumnus.

The 100 businesses are owned by 127 former Sun Devils who have earned 155 degrees from ASU, across every college.

The Sun Devil 100 Class of 2020 had revenues of $6.1 billion and employ more than 10,200 people in 10 states. The firms include the well-known Gadzooks Enchiladas and Soup, Dircks Moving and Logistics, and the San Diego Civic Youth Ballet, whose president and CEO is Molly Terbovich-Ridenhour, who earned a master’s degree in dance in 2002. Others in the top 100 include a behavioral health agency, a fitness business, a talent-booking agency, a pizza restaurant, two wineries, a Virginia-based architecture and design firm, and Tommy John, a New York-based clothing brand founded by Erin Fujimoto and Tom Patterson, two alums who cashed in their 401k accounts to reimagine men’s underwear. 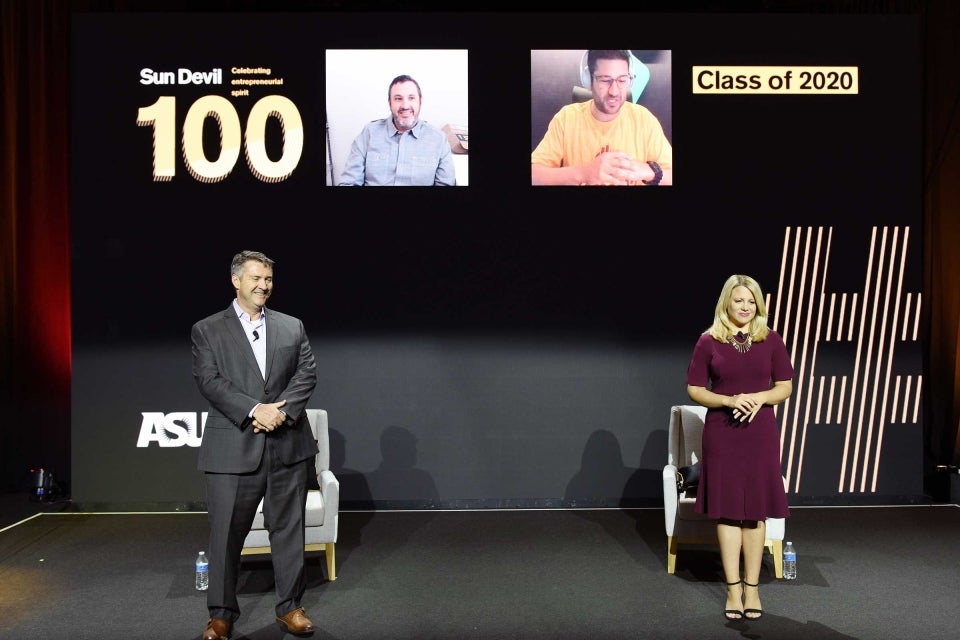 The Sun Devil 100 event was hosted by Ray Schey, publisher of the Phoenix Business Journal, and Kylee Cruz, reporter and anchor for AZ Family and a graduate of the Walter Cronkite School of Journalism and Mass Communication at ASU. They were in a studio during the event and interviewed the winners, David Freedman (right) and Chris Stark, via Zoom. Photo by Tim Trumble

2. Design Pickle, a graphics-design subscription service founded by Russ Perry, who earned a Bachelor of Arts in interdisciplinary studies in 2005.

4. Tallwave, a marketing and public relations company founded by Jeffrey Pruitt, who earned a bachelor’s degree in accounting in 1994.

6. Print.Save.Repeat, a toner cartridge business founded by Errol Berry, who earned a bachelor’s degree in supply-chain management in 2002.

8. Pinnacle Growth Advisers, a human-resources and labor-relations firm founded by Brent Orsuga, who also is the president and who earned a bachelor’s degree in interdisciplinary studies in 2000.

9. Willmeng Construction, whose president and CEO is James Murphy, who earned bachelor’s and master’s degrees in construction, in 1998 and 2009.

10. Press Coffee, co-owned by Jason Kyle, who earned a bachelor’s degree in marketing in 1994.

VanBockern, who earned bachelor’s degrees in accountancy and computer information systems, said the Sun Devil 100 has strengthened her bond with ASU.

She joined the ASU Alumni Association, but was not active. She founded Skin Script, an online retailer of skin-care products, in 2007.

“One day I got the Sun Devil 100 email. I loved ASU and I had such a great experience, I thought, ‘I’ll nominate myself,’” she said.

VanBocken had endowed a scholarship, but after being honored for the first time, in 2015, when she was one of only three women, she increased the amount of the endowment and became involved in Women in Philanthropy, part of the ASU Foundation.

“I’m glad this program was developed because it brings me back to ASU and the warm feelings I had of when I was going to college,” she said.

“My diplomas have been reframed in much more expensive frames in my office, along with my Sun Devil 100 awards.”

The entrepreneurs also received congratulations from Jake Plummer, the quarterback who led the Sun Devils to an undefeated regular season and the 1996 championship of what was then the Pac-10. He said that’s he’s now an entrepreneur himself, launching ReadyList Pro, an interactive football playbook training platform.

“I’m warning you – I’m a competitor, so watch out. I’ll be vying for that No. 1 spot someday,” said Plummer, who was inducted into the College Football Hall of Fame last year.

Arizona State University offered the first Spanish orientation to families this summer and has launched a series of new, bilingual resources for prospective Sun Devils. Two prominent journalists who are passionate about breaking down barriers to higher education have been helping reach bilingual families with accessible information for first-generation families and beyond. The first all-Spanish w...

Arizona State University offered the first Spanish orientation to families this summer and has launched a series of new, bilingual resources for prospective Sun Devils. Two prominent journalists who are passionate about breaking down barriers to higher education have been helping reach bilingual families with accessible information for first-generation families and beyond.

The first all-Spanish welcome events, Bienvenida, reached 65 families of incoming students in May and June and featured moderation by Vanessa Ruiz, an Emmy Award-winning news anchor and Professor of Practice at ASU’s Southwest Borderlands Initiative. The events focused on students’ transition to ASU and what families could expect. It included panels on housing, insurance, the student experience and more. Many of the incoming Sun Devils at these events are first-generation college students. Ruiz remembers her own experience as a first-generation student at Florida International University and was excited to demystify the college experience for other families.

“I myself am a first-generation student. I’m also the daughter of immigrants. I was also the first of my immediate family to go to college,” she said. “I know what it’s like to have to face the daunting task of trying to figure college out when maybe your parents don’t understand the language or don’t understand exactly how the process works.”

Some of the questions that came up surrounded housing, which Ruiz said can be a confusing cultural nuance in Spanish-speaking communities, where it may be atypical for children to move out of their parents’ houses at age 18. She said it was critical to be able to provide information to families in their own language and that she loved seeing people “lose some of the nerves and speak up” with their questions.

“I’m happy to say that I've had a pretty successful career. And I really want to convey that sense of confidence and inspiration and motivation for our incoming ASU students and their families,” she said. Another influential local journalist is helping with a weekly information session on the ASU en Espanol Facebook page, a new resource that offers regular broadcasts in Spanish. Emmy Award-winning former Univision anchor Mary Rabago co-hosts the sessions with Access ASU Executive Director of outreach Marcela Lopez at noon every Wednesday (broadcasts are slated to continue for the next six months).

The Facebook page features regular workshops for parents, sharing information from ASU’s American Dream Academy with tips about developing reading skills, pathways to college, financial aid and scholarships, resume building for students, the importance of being in dialogue with your children’s teachers, credits and test score requirements for college admission, explainers on terms like “prerequisite” and more.

Rabago, who now runs her own production company, sees familiar themes in the weekly virtual events from her own educational journey, which started in Sonora, Mexico.

She said a significant challenge that the broadcasts take on is changing the mentality that college is inaccessible or that there’s no money in the family to send kids to college.

“Being the oldest of nine kids, I know that the urgent matter was for me to start working so I could help with expenses in the house. My father worked in the fields, and my mom was a stay-at-home mom,” Rabago said.

“I know a lot of people in the community can relate to this experience. ... If we change that mentality we change the future of those families in our community. Education is the one thing nobody can take away from you, whatever status you have in this country. Education is going to open doors wherever you are.”

Rabago emphasizes that it’s crucial to meet people where they are, citing that the Latino parent community receives much of their news on Facebook and that virtual programming is more accessible for busy people.

“Most of these parents don’t have the time or the transportation in many of these situations to go to a physical place to take classes from ADA. Now they have the possibility to do the program virtually,” she said. “You’re going to where the community is instead of waiting for the community to come to you.”

The weekly videos have reached hundreds of thousands of views, Rabago said. She said she’s grateful that Access ASU leaders are so dedicated, and she’s proud to do her part to help families access college.

“(I’m) extremely happy and honored … to be the bridge to the Latino community,” she said. “You can never underestimate the potential you’ll have.”

Christian Rosario is the assistant director of American Dream Academy at ASU, an eight-week program that helps families prepare for their children to have successful academic careers. Rosario is featured in many of the resource videos. He said research revealed that most of the parents they worked with were on Facebook, so they launched ASU en Espanol in May to provide tools on that platform that were accessible while people were at home because of COVID-19.

He said the “consejos” or tips featured are inspired by feedback and questions from families, regardless of where they’re from, to be able to better access the American dream of education.

“There is a great need during these times for families to stay connected with their schools, district and our university and we will continue to provide our virtual services and expand through innovation and creativity,” Rosario said.

Families have reached out thanking Access ASU for the resources, which also include a helpline602-496-1487 for parents as well as weekly tips by text.

Edmundo Hidalgo, ASU vice president of outreach partnerships, said that Access ASU is constantly making connections and building community around access to higher education, including expanding ASU resources to be accessible in Spanish. The ASU en Espanol resources are the latest example of innovative work in higher education access.

“At ASU we pride ourselves on inclusion and access to education, but when you can’t receive information in your native language and maybe your kids will be the first in your family to go to college, that can be very challenging,” Hidalgo said.

“We have the resources to help students be successful, so we’re proud to be inspiring them and also providing their families with the information they need going into the college journey. We’re also thankful to feature amazing models of success such as Vanessa, Mary and our program leaders at ASU.”

Ruiz and Rabago both have substantial platforms in Latino communities in Arizona, and their participation means the message of higher education access can reach more homes than ever. Ruiz said she feels fortunate to have built a strong career and is gratified to be able to give back to the community..

“I’ve had 17 years in front of a television camera, and I had incredible moments. I’ve been very fortunate in terms of what that career offered me,” she said. “I feel privileged now to use that position for something that I hope will leave a positive, lasting legacy that is much bigger than myself and that will benefit younger students and their futures for many years to come.”

Ruiz said there’s more work ahead, though the details are still being planned out. But the mission remains the same.