Community input is crucial to restoring justice in some small societies

A man steals another man’s property. The victim beats up the thief, and the thief retaliates by seriously injuring the other man’s hand.

In a Western justice system, a judge would consider putting the accused in prison for theft and assault. In some small societies, like communities in the Enga Province of Papua New Guinea, a village court tries to address the impact of the crime on those involved.

In this case, a panel of local magistrates worked out an agreement that compensated the victim in livestock and cash. Clan members and the accused’s family took into account the injured man’s limited ability to work and future medical expenses, and gave far more than the agreed-upon amount. They did so in an attempt to make up for the harm inflicted and to restore harmony and cooperation in the community. This process is known as restorative justice. 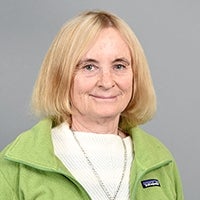 Polly Wiessner, a professor in Arizona State University’s School of Human Evolution and Social Change, has been working with small communities for more than 40 years. She recently analyzed more than 300 village court sessions in Enga, focusing on how the restorative justice system adapts to changing cultural norms. These norms have been influenced by the adoption of new technologies such as mobile phones, weapons, cash and motor vehicles.

Alongside a team of Enga collaborators, she observed how crowds responded during the proceedings, aiming to better understand how the community is engaged in enforcing and adapting societal norms. The researchers then followed up to see what resolution or settlement actually occurred.

The findings show that input from the crowd attending the hearing is crucial in the decision-making process and settlement.

In a small community, many people are aware of wrongdoing before it appears in these customary courts, and the magistrates need to take into account the perception of community members. By listening to all sides, the magistrates are better equipped to order a settlement that satisfies both parties, reducing the likelihood of revenge or retribution.

“Papua New Guinea has a plural justice system, meaning they have formal courts imposed by colonial powers and customary courts which draw on the power of community and customary law,” Wiessner said.

Most cases are taken to village courts to be resolved within the community instead of the formal court system.

Focusing on the community

Wiessner focused on cases about marriage, property and land disputes, and assault.

Of the 333 cases she studied, the crowd was quiet only 44% of the time. Overall, the crowd had the least input on land disputes, and the most feelings to convey during marriage complaints. The social contract of marriage has seen immense changes in norms in the last few decades, which impacts the social fabric and many aspects of life in small communities.

The crowd tended to show displeasure, through ridicule and swearing, during hearings that involved extreme cases of adultery, while hearings that promoted restoring relationships were more likely to receive support.

The findings also stress that a punitive justice system is unlikely to be effective within Enga communities. A restorative justice system, focusing on making amends, is necessary to maintain community. Jail time was not recommended in any of the cases Wiessner examined.

“What was surprising to me was that they almost always pay a lot more than they have to.” 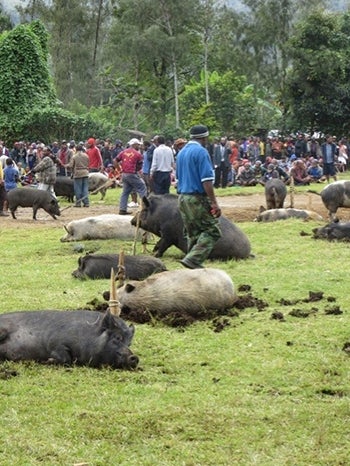 Community members assembling compensation, in the form of livestock, for a wrong done.

One surprising observation was that often, when the wrongdoer could not afford to pay the settlement, community members chipped in and offered cash to help them make amends and restore their reputations and relationships. Wiessner explained that in the smaller communities, typically consisting of 200 to 500 people, everyone has something to give. Community members depend on each other, and the society is built on sharing and exchange. They can’t afford to lose people by sending them away to jail, and instead want to keep their skills and positive contributions in the community.

“What was surprising to me was that they almost always pay a lot more than they have to,” Wiessner said. “To honor their reputation and to say to the person, ‘OK, someone did something wrong, but we're going to make this right and you're going to start anew.’”

Restorative justice differs from the punitive justice system seen in many industrialized societies, but Wiessner notes there are some youth courts in countries like Australia, New Zealand and Canada that successfully integrate restoration into settlements.

“There is much to learn from small-scale societies about the benefits of balancing retribution and restitution,” Wiessner said.

People communicate and interact in new ways, and attitudes about warfare, power, marriage and honor have changed. For example, instead of knowledgeable village elders holding strong positions of authority, younger men have acquired guns and gained influence, and the introduction of cellphones has coincided with increased rates of adultery and divorce.

Technology has been changing culture and shaping communication for decades. Given the continued adaptations to increased use of technology, Wiessner plans to keep researching societal norms. In Enga, traditions have been challenged since colonization in the 1950s, more so as new technologies become more popular.

“We're absolutely continuing this research. We're trying to expand it geographically, and we want to look at changes through time,” Wiessner said. “Because people are changing and attitudes are, too. Even now, during COVID-19, our team is still working very hard, doing marvelous work and sending me updates on cases every week.”

The paper “The role of third parties in norm enforcement in customary courts of the Enga of Papua New Guinea” published in the Proceedings of the National Academy of Sciences in December.

Funding and support came from NSF award 1917824: Restorative Justice among the Enga of Papua New Guinea: Adapting to a Changing World, the Enga Provincial government, and the Tradition and Transition Fund.

Three days of highly-interactive, creatively inspiring and collaborative sessions are at the center of Arizona State University's upcoming ShapingEDU Winter Games, a free virtual conference from Jan. 5–7, 2021.Described by program organizers as a “digital immersive experience” for dreamers, doers and drivers interested in learning, co-creating and community, Winter Games will offer ple...

Program aims to design the future of education, smart regions

Described by program organizers as a “digital immersive experience” for dreamers, doers and drivers interested in learning, co-creating and community, Winter Games will offer plenty of opportunities to explore with and be inspired by colleagues who are innovating what comes next in education and in smart region planning during and after the pandemic. “We know you have thousands of other things you could be doing while you work/learn during a pandemic, but I think this is a foundational ‘reset’ event,” said Samantha Becker, who serves as executive director of creative and communications at ASU's University Technology Office, as well as community director and co-founder of ShapingEDU. “If we don’t take an intentional pause to together address the question of, 'Where do we go from here?' we risk splitting off in different directions. This is an opportunity to bring together a chorus of voices to present and spark real change.”

Winter Games is organized by the creators of Learning(Hu)Man virtual summer camp, which brought together more than 2,100 registered participants from around the world in July 2020 to advance emergent strategies for learner success. This new set of games invites students, faculty, education leaders, technologists and business leaders to engage in a breadth of activities designed to surface the best in emerging approaches for shaping the future of smart campuses, cities and education.

Daily keynotes, breakout and hackathon sessions, lunchtime activities, and end-of-day gatherings that combine entertainment, collaborative activities and socializing are all part of the highly interactive schedule. Participants can expect to learn and collaborate with colleagues, and also walk away with ideas of how to design smart city and region planning, as well as deliver engaging online learning experiences.

“ShapingEDU is a really fun community,” said Michelle Sullivan Govani, who serves as director of strategy and partnerships for ASU’s Office of Applied Innovation and will be among the presenters at Winter Games. “Many of the people who are engaged with ShapingEDU are optimistic about the potential for technology to change lives, expand access to opportunities and improve outcomes in our education system. The reality, however, is that the work of achieving that potential isn’t really that technological. Social and political systems — including our education system — are complex, have multiple competing purposes and tend to ‘domesticate’ our technological interventions in ways that end up limiting the promise of change. There are also many stakeholders to be considerate of: learners, families, educators, administrators, policymakers and more.”

It is the continual effort to reach out to and include as many of those stakeholders as possible that leads to the consistently productive results flowing out of ShapingEDU events, and the Winter Games virtual immersive event promises to extend that process in significant ways.

“Last year UTO, along with other internal and external partners, hosted the Smart Region Summit, which focused on the application of new technologies, systems and innovation strategies that could be directed to the idea of the ‘smart city and region,’" Becker said. "It was a week of activities attended by more than 300 regional smart changemakers who grappled with themes like sustainability, transportation, community partnerships, ongoing education and more.

“Based on the engagement around this event, which ultimately launched The Connective —a Diamond Co-Convener of Winter Games — we saw so many thematic overlaps with ShapingEDU and thought it would be interesting, and very much in the spirit of Winter Games, to build a ‘smart’ track into our event. Smart campuses are often incubators to build smart cities and regions, after all.”

Cross-Countries Smart Skiing, one of three tracks to be featured at the upcoming Winter Games, is the official track of the third annual Smart Region Summit. Slack is among the list of Co-Convenors helping to bring the games to virtual life.

“We joined the conversation at Learning (Hu)man this summer, and Slack was eager to participate in the next gathering of education changemakers," said Allie Nakonek, Slack customer success manager for higher education and another Winter Games co-presenter.

“In our (Learning(Hu)Man) sessions and others, it gave me great perspective to consider the challenges and opportunities faced in higher education, at a deeper level than just how Slack fits into the picture," Nakonek said. "It was also really encouraging to hear how solutions developed by students and professors can resonate across and beyond the education community. Makes me very excited to hear about the ‘smart cities/classrooms’ at Winter Games!”

For more information and to register for the free event, visit the Winter Games website.

Written by Paul Signorelli, one of three Storytellers in Residence for ShapingEDU. He can be reached at paul@paulsignorelli.com.