Many historians have stated that this country was founded on the exploitation of Indigenous peoples and the Earth.

Their land has been colonized for centuries. Resources such as water, minerals and wildlife were once honored and abundant, but now are polluted and scarce.

This history is why Native Americans have been consistent allies to environmental movements.

Arizona State University’s Project Humanities hosted a Nov. 17 livestream event titled “Environmental Justice: Indigenous Communities” to explore the intersection of justice for the Earth, justice for Indigenous peoples and how to mend the wounds of the past.

“If nothing else, the summer 2020 crisis in racial justice has forced conversation about systemic racism to name ‘white supremacy’ as the proverbial unnamed monster in the room,” said Neal A. Lester, professor of English and director of Project Humanities. “That many are looking at racial (in)justice in its myriad manifestations and permutations is exactly why this conversation about Indigenous communities and lands is imperative and beneficial. That we have such a panel of experts doing this work is truly an honor. Our desire is that coming together for this conversation will move us all to some action — great or small — to make us better and to make us think differently about our relationship with each other and with the stolen land upon which this very USA created itself.”

Together, the panel examined the roots of environmental racism, colonialism, corporate mining and its impacts to Native lands, water diversion to fill the need of larger cities, climate change, demonstrating empathy for Native American tribes and how to become an ally to Indigenous peoples. 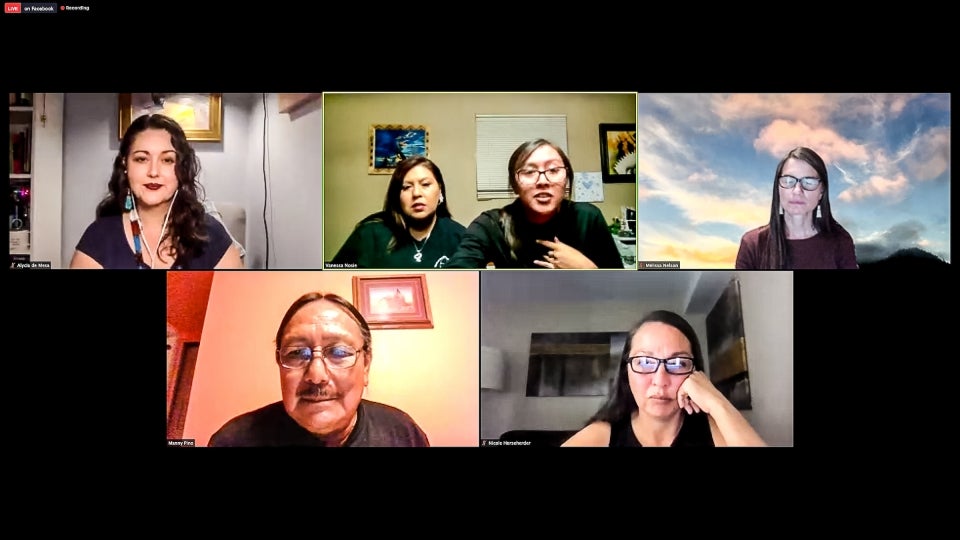 The group spent the first half of the program defining and tracing the roots of environmental racism. Pino, who hails from the Acoma Pueblo in New Mexico, said he grew up next to a uranium mine that contaminated the environment and claimed the lives of a handful of his relatives. Pino added that those same mines were abandoned decades ago and were never reclaimed or cleaned up.

“All of these companies have abandoned and left us with our contaminated aboriginal homelands,” Pino said. “It not only had impacts to the environment, but to human health.”

Nelson said the roots of environmental racism trace back more than 500 years to explorer Christopher Columbus. She cited American Indian thinker Jack D. Forbes’ book "Columbus and the Other Cannibals" as a vital text.

“He (Forbes) talked about how when Columbus first came here, he brought this spirit of conquest and this spirit of colonialism. And, of course, it was fueled by the Vatican and the pope’s Doctrine of Discovery,” said Nelson, an Indigenous writer, editor and scholar-activist. “That basically said that these Indigenous lands and the millions of people who are here are pretty much invisible because they’re not Christian and weren’t tending to the land properly … so it goes way back and it has many faces.”

Horseherder, a Diné from Black Mesa in northeastern Arizona, said years of coal mining decimated their land and polluted their water.

“In all of the years that I had been growing up there, there were no more springs. And all of Black Mesa, we don’t have running rivers and springs, and we had springs all over the plateau,” Horseherder said. “The springs near my home was also gone. And that’s where my search began.”

Horseherder added that the Navajo Generating Station coal-fired power plant near the Arizona-Utah border shut down a year ago and was a major victory, but the work continues.

“One of the things we have to make sure of now is reclamation will occur under the federal government,” Horseherder said. “We as Indigenous people have to stay vigilant and (make sure it) happens to the standard that we need it to happen so that people can go back and live on those lands the way they used to.”

Nosie said environmental racism is much more than damage to Native land; it equates to cultural destruction and genocide.

“Our environment is a key source to our identity and who we are as Indigenous people,” said Nosie, who is a community organizer for her tribe. “Our cultural resources come from the Earth in order to conduct a lot of our resources. So when you talk about environmental racism, you’re talking about cultural destruction and genocide on our people.”

De Mesa, a fourth-generation Arizonan whose heritage is a mix of Mexican, Western Apache, Indigenous Mexican of Durango, Japanese and British/German, said it’s every non-Native’s duty to inform themselves about the history of these lands and become an ally.

Pike said taking action by putting pressure on political leaders is not only effective, but every citizen’s right.

“Make your voice be heard because we are the people, we elect them to represent us so your voice needs to be heard,” said Pike, who co-leads (with her grandfather Wendsler Nosie Sr. and mother Vanessa Nosie) the nonprofit Apache Stronghold, which is fighting to stop a mining project that they say would desecrate Oak Flat, an Apache sacred site near the San Carlos Apache Indian Reservation. “Ask the question, ‘Who am I? Where do I come from?’ You’ll find a connection not just to yourself and your people, but it’ll also help you connect to what we’re trying to do.”

Pino said getting corporations and politicians to stop desecrating Native land has been a lifelong battle for him and others. It's something Pino said he may not see come to fruition during his lifetime, but he's not stopping no matter what.

Sun Devils and Spartans finish in tie after ASU ties it late in regulation, 1-1 ... Sun Devils and Spartans finish in tie after ASU ties it late in regulation, 1-1