After Gov. Doug Ducey signed into law in 2019 a bill creating a study committee to examine ways that Arizona can battle violence against American Indian women and girls, state legislators tapped Associate Professor Kate Fox and a team of Arizona State University researchers to seek the data that could help the state win that fight.

Fox, a professor in the School of Criminology and Criminal Justice, is known for her work collaborating with community partners to improve the safety of Native women. One of the biggest threats to Native women’s safety is a national crisis known by the abbreviation MMIWG, for missing and murdered Indigenous women and girls. Fox, working with her team in the Watts College of Public Service and Community Solutions, now serves as lead researcher and is partnering with committee members to write their final report, due in late 2020. Nez-Manuel has professional experience working with tribal women and urban youth. She also has shared personal realities of missing women.

“I feel so honored to be trusted with this work,” Fox said of her partnership with the study committee. Fox is director of the Research on Violent Victimization Lab, also based at Watts College. Her research focuses on crime victimization, particularly against underserved populations, including American Indian women and girls.

Study committee to come up with statewide plan

HB 2570, which passed unanimously in both the state House and Senate, led to the creation of a 23-member study committee composed of legislators, social advocates, law enforcement, and tribal officials, among others. Jermaine — the committee’s chairperson — along with Fox and the rest of the committee are tasked with assessing the scope of the problem, finding out how many women and girls are murdered or missing, and coming up with a statewide plan to reduce the occurrence, Fox said. The plan is expected to include recommendations for state agencies to follow to curb future victimization, she said.

Fox said there’s been an explosion of such legislation in the past year. In May 2019, Arizona was the third state to pass such a law. Since then, a total of 14 states have enacted similar legislation, along with the federal government through a group established by an executive order.

Fox said a national study found that in some counties, American Indian women were being murdered at a rate 10 times the national average of all murder victims.

“Why are American Indians at such high risk of being murdered or going missing at such high rates?” Fox asked. “Is it connected to human trafficking? Domestic violence? Sexual abuse? We don’t know yet. There’s just not enough good data yet. But we do know that the historical — and current — oppression of American Indian people plays a key role in perpetuating violence against this population.”

Two other studies have shown that American Indian women are more likely to be stalked, sexually assaulted and abused by an intimate partner compared to white, African American and Hispanic women, she said.

Victims, others are starting to speak

Tradition and culture in many American Indian communities make it taboo to speak someone’s name after they have died, Jermaine said, which sometimes affects whether a missing and/or murdered person situation is reported.

“There are cultural shifts happening along generational lines and communities and individuals are beginning to talk about what happened to them and their loved ones,” Jermaine said. “We have worked with tribal councils to ensure that we are respecting their communities and listening to their members. We also have victim services counselors at every community event to assist families and help connect them with culturally appropriate services.”

Another issue for the committee to consider is how to work with sparse or incorrect victim data.

“Bodies are found and it is sometimes unclear to police whether that person was American Indian,” Fox said. “Officers sometimes put ‘white,’ ‘Hispanic,’ or ‘Asian’ down on their reports. Racial misclassification is still a big problem.”

A report by Canadian authorities about violence against Indigenous women and girls, and the grassroots movement in the U.S., sparked the recent legislation, she said.

“Canada’s report started waking up the U.S. They did a national inquiry — more than 1,000 pages with nearly 100 policy recommendations. They labeled MMIWG as genocide and the U.S. is now finally paying attention,” she said.

In the U.S., the first major report was conducted by the Urban Indian Health Institute, which showed that more MMIWG happens than is known or publicized by the media.

The grassroots movement that had existed in the U.S. for decades, and Canada’s report, ignited into state legislation. Arizona’s version is seen by the American Indian community as one of the better laws and worthy of emulation by others, Fox said.

“All eyes are looking at Arizona,” she said. “We have a robust bill and the goal is for this to have long-term life-saving implications.”

The committee has a big project ahead of it, Fox said, but the crisis it is investigating must be overcome.

“Our goal is to empower communities to be healthier and safer,” she said. “By working to save lives.”

The First Peoples' COVID-19 Resource Drive is an initiative to supply much needed supplies to tribal communities struggling with the impact of the pandemic. Created and managed by a team of Arizona State University alumni, the group’s first project sent emergency supplies to Navajo and Hopi communities.The second drive took place on June 25 at Sun Devil Stadium. Three moving trucks full of suppl... The First Peoples' COVID-19 Resource Drive is an initiative to supply much needed supplies to tribal communities struggling with the impact of the pandemic. Created and managed by a team of Arizona State University alumni, the group’s first project sent emergency supplies to Navajo and Hopi communities.

“Tribes are resilient and determined to see through this pandemic just as our ancestors have in times past,” Denetdale continued. “We thank all those who volunteered, gave monetarily or donated items and time to come support the First Peoples' COVID-19 Resource Drive.”

The team is developing a plan to continue supporting tribal communities of Arizona as long as they are affected by COVID-19. 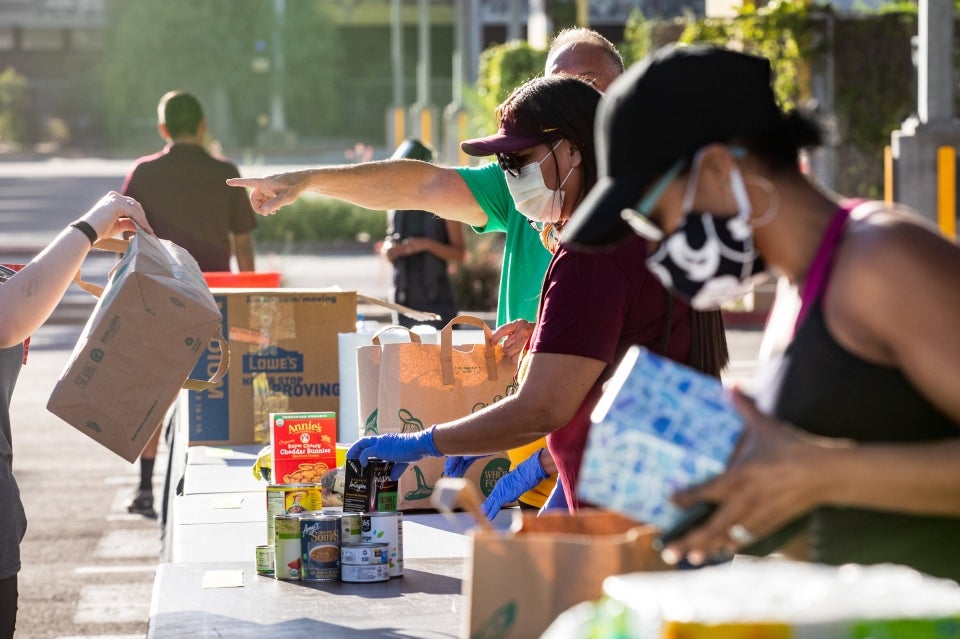 ASU volunteers sort through the stacks of donations received at the second First Peoples' COVID-19 Resource Drive event on June 25 at Sun Devil Stadium in Tempe. 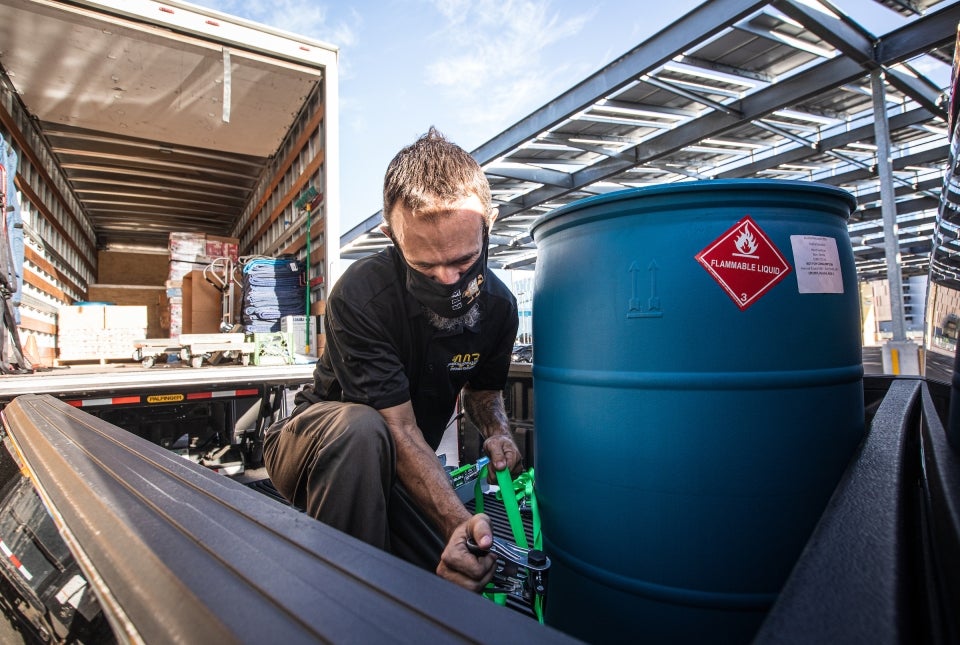 Jason Miguel, with M3 Moving, secures a 55-gallon barrel of hand sanitizer that will go to the Hualapai tribe later that day along with other donations and supplies. 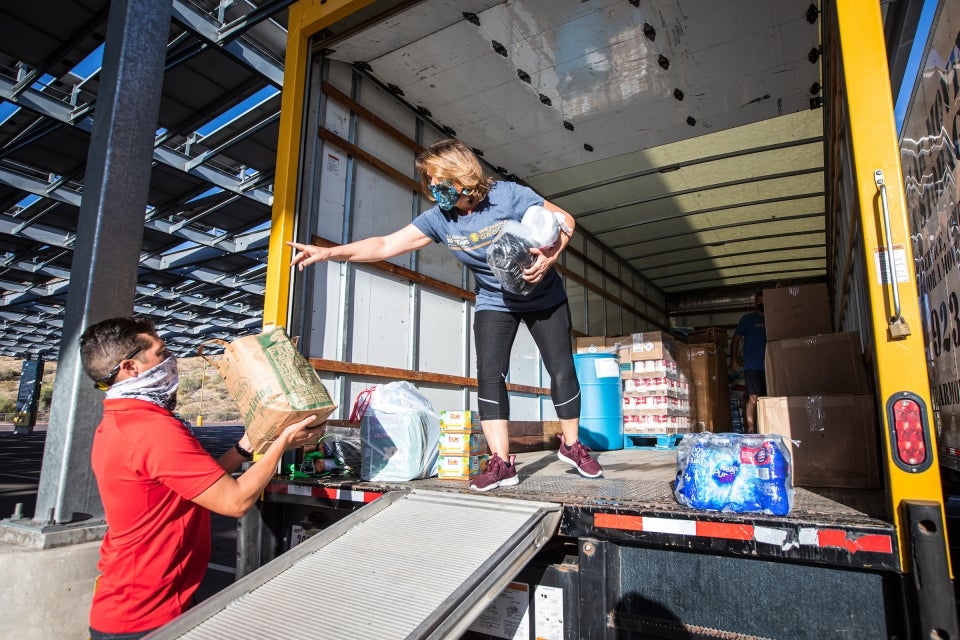 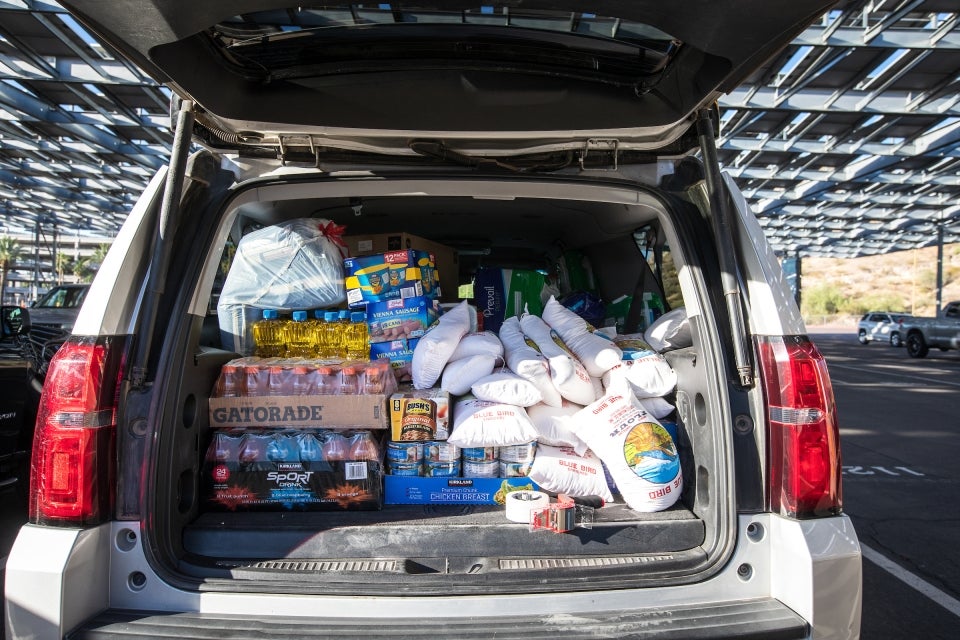 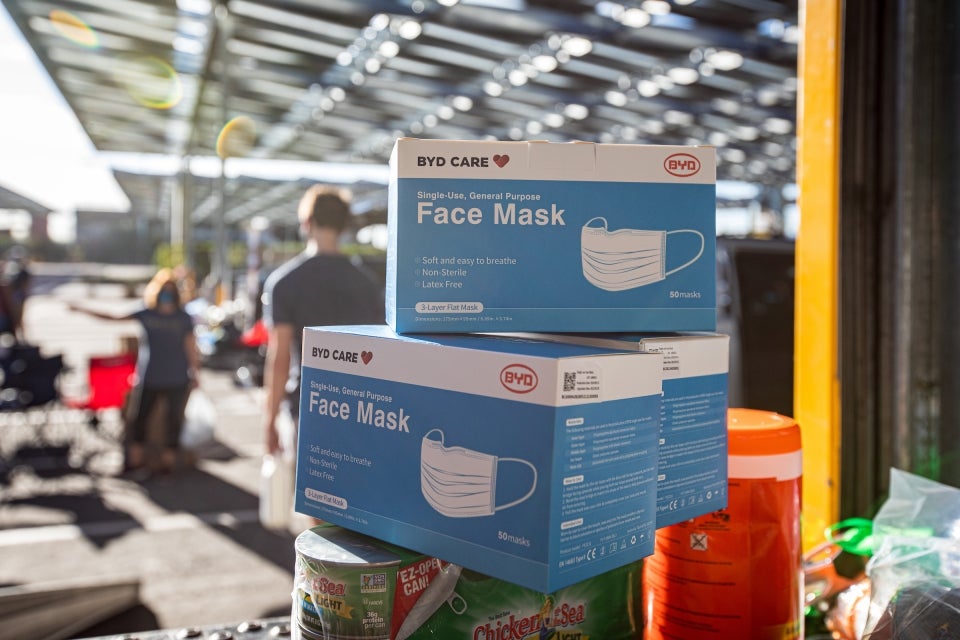 Personal protective equipment, such as face masks and hospital gowns, was among the categories of donations requested by the initiative. 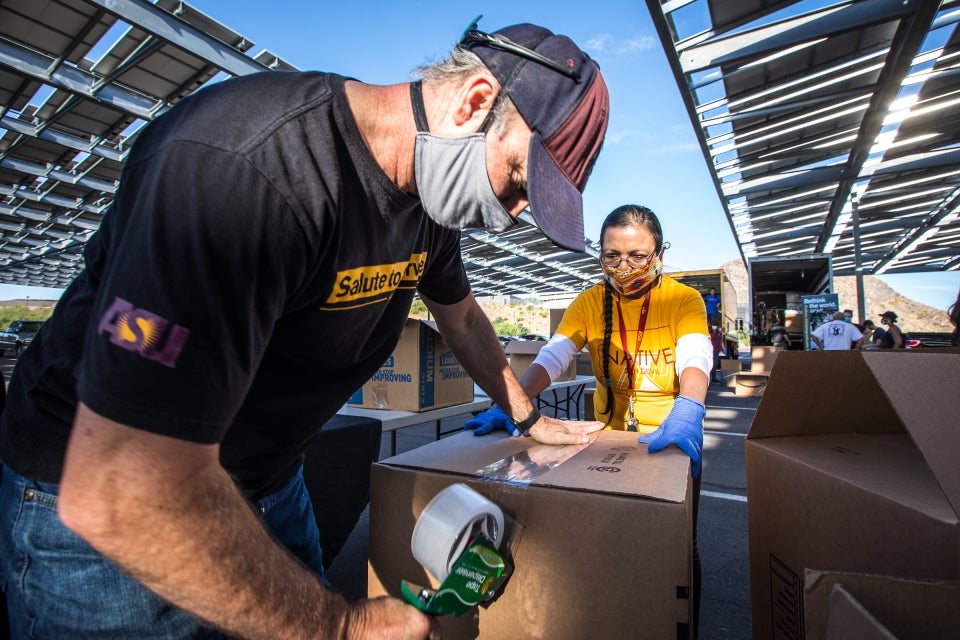 ASU staff members Mike Sever and Vickie Baldwin tape the bottoms of boxes that will be filled with sorted donations. 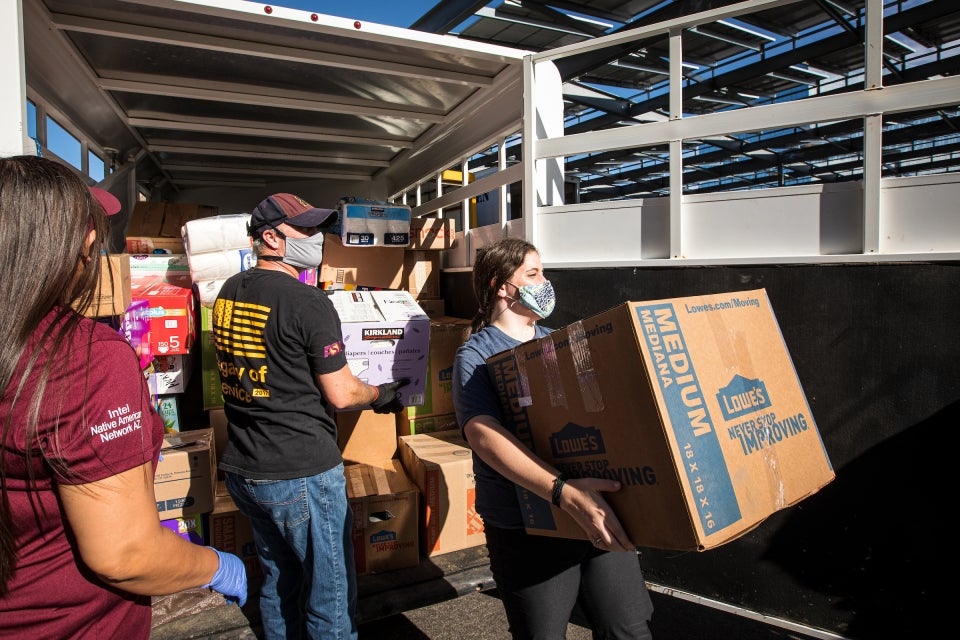 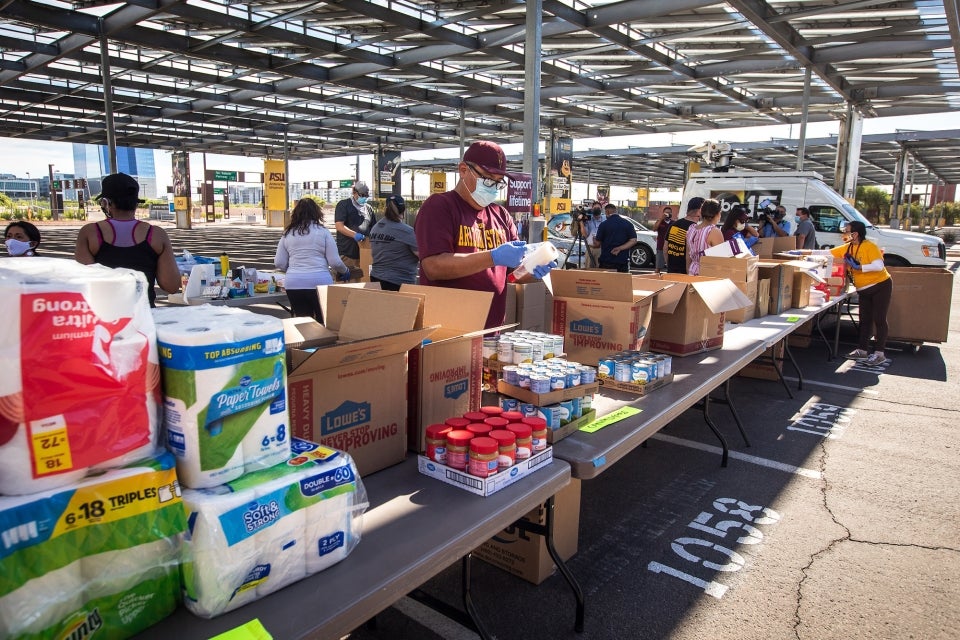 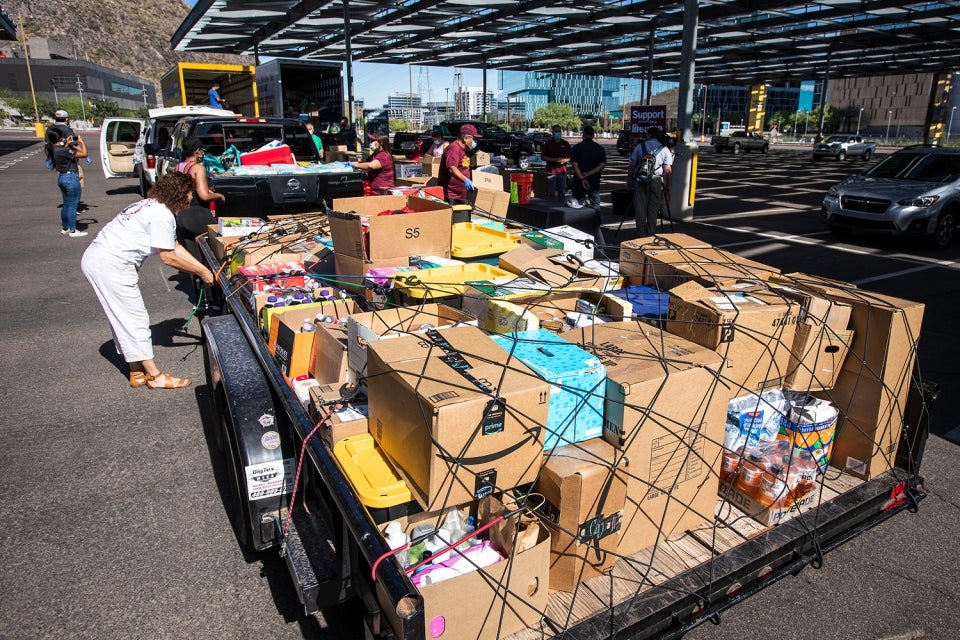 The Native American Fatherhood and Families Association arrived with a trailer loaded down with donations for the drive. 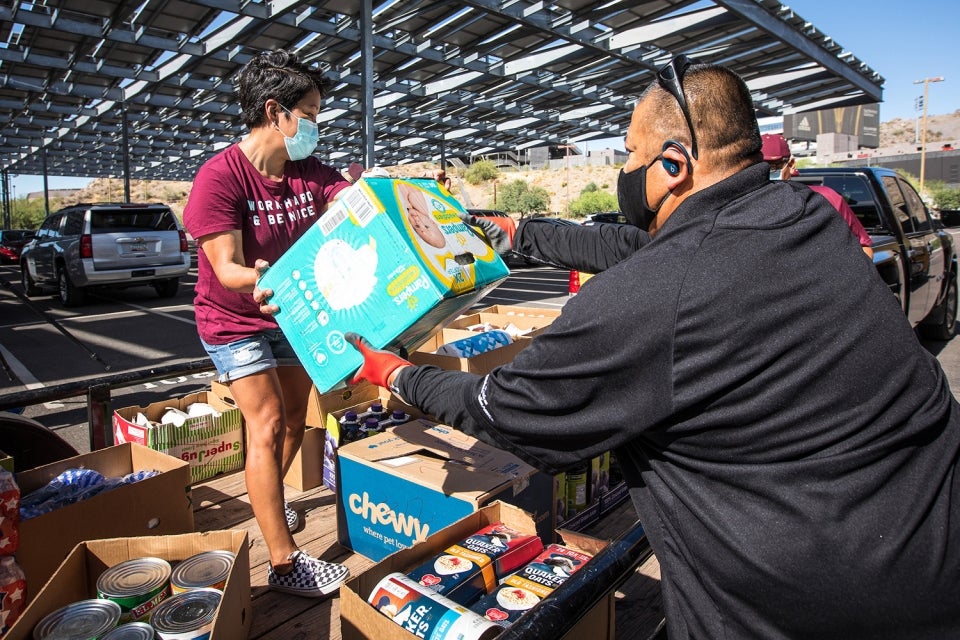 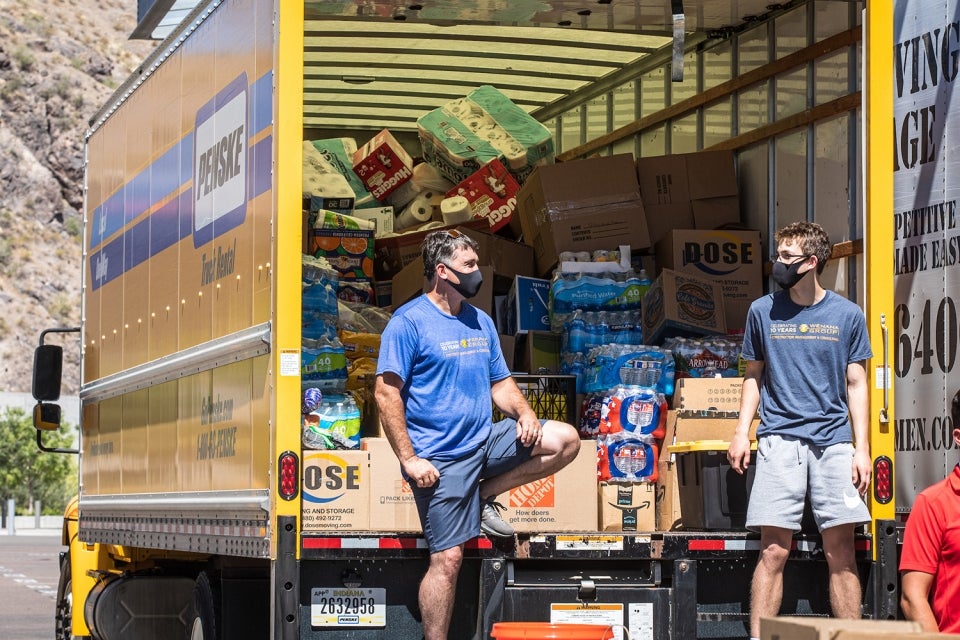 Wenaha Group president Rob Quaempts (left), chats with his step-son Dillon Strey, 16, as they are about finished collecting donations. 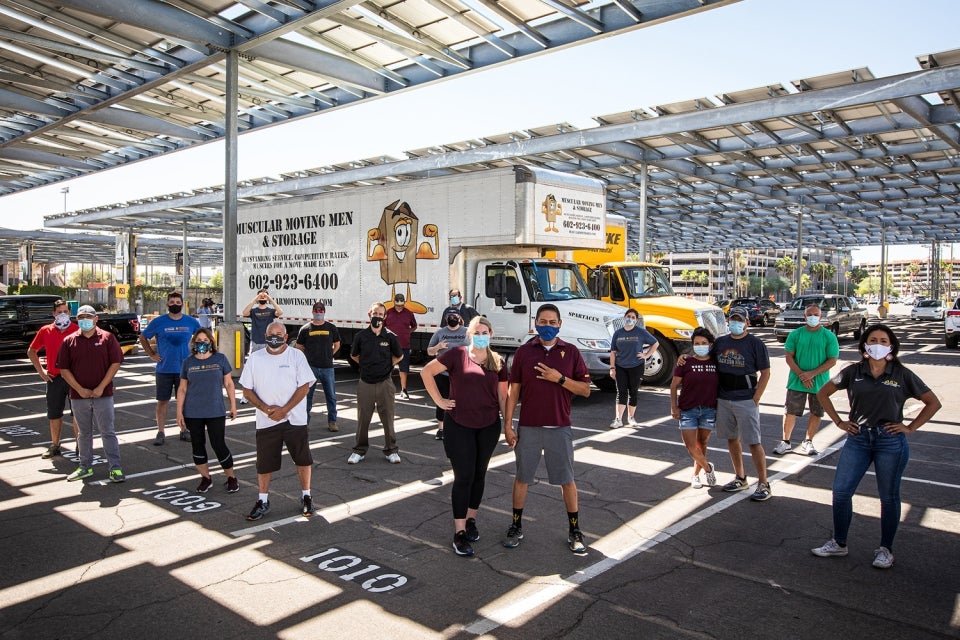 Donations filled two 26-foot trucks; the Penske transport headed to the Hualapai Tribe, and the Muscular Moving Men and Storage vehicle left to deliver its contents to the Navajo at Fort Defiance. 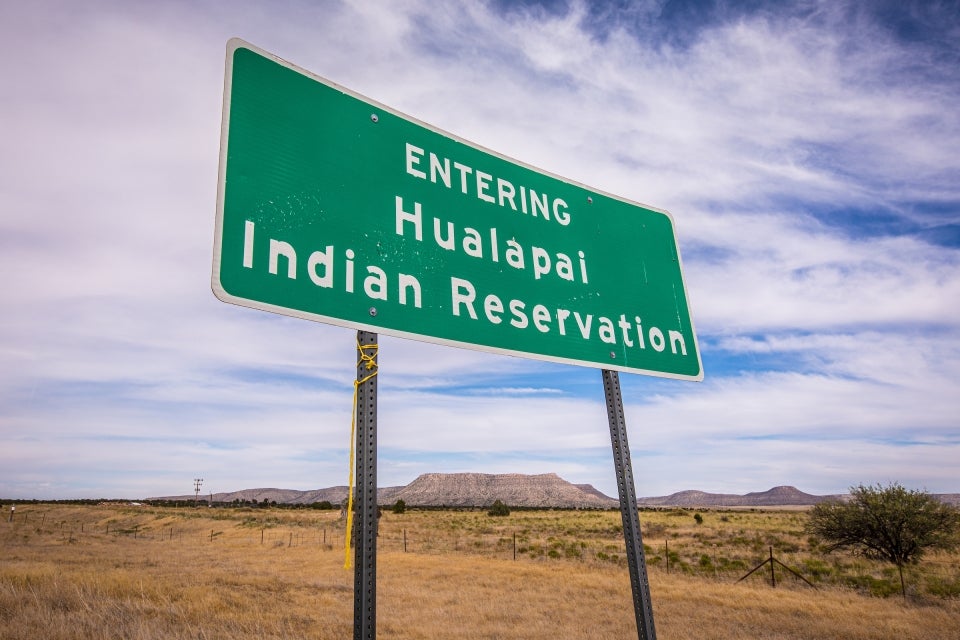 The Hualapai Indian Reservation is in Mojave Country, in the northwest part of the state. 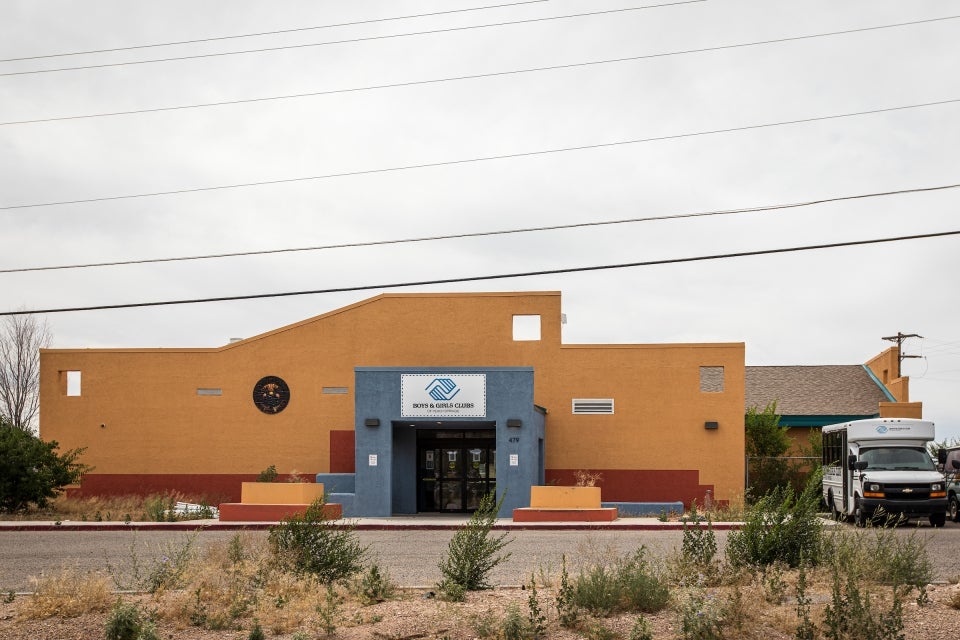 The Boys and Girls Club in Peach Springs acted as the staging point for the truckload of donations to be distributed to the community. 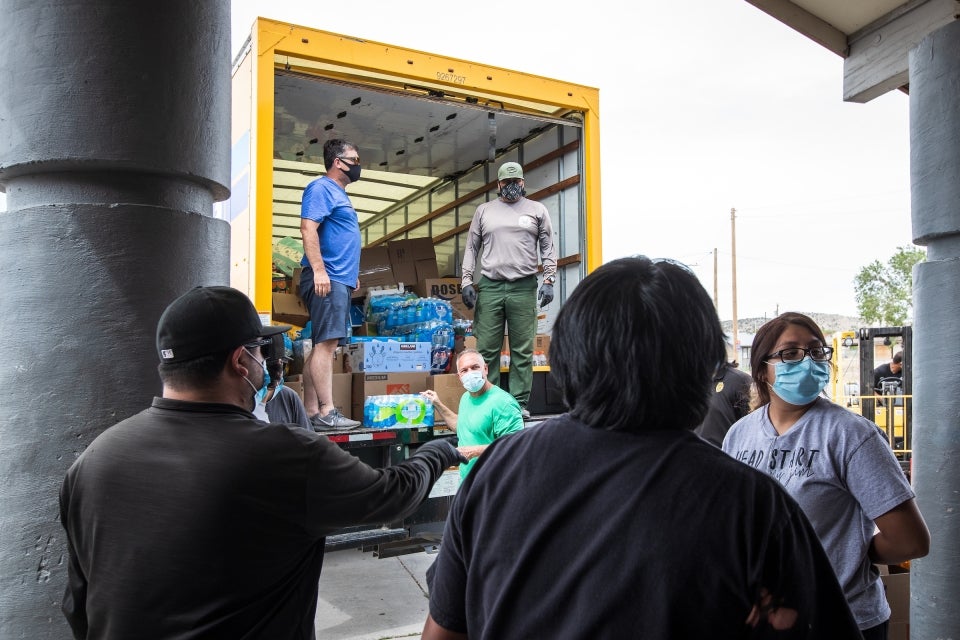 The Hualapai tribe is under a "stay-at-home" order and are unable to make it to the closest large town, Kingman, which is 50 miles away for supplies. 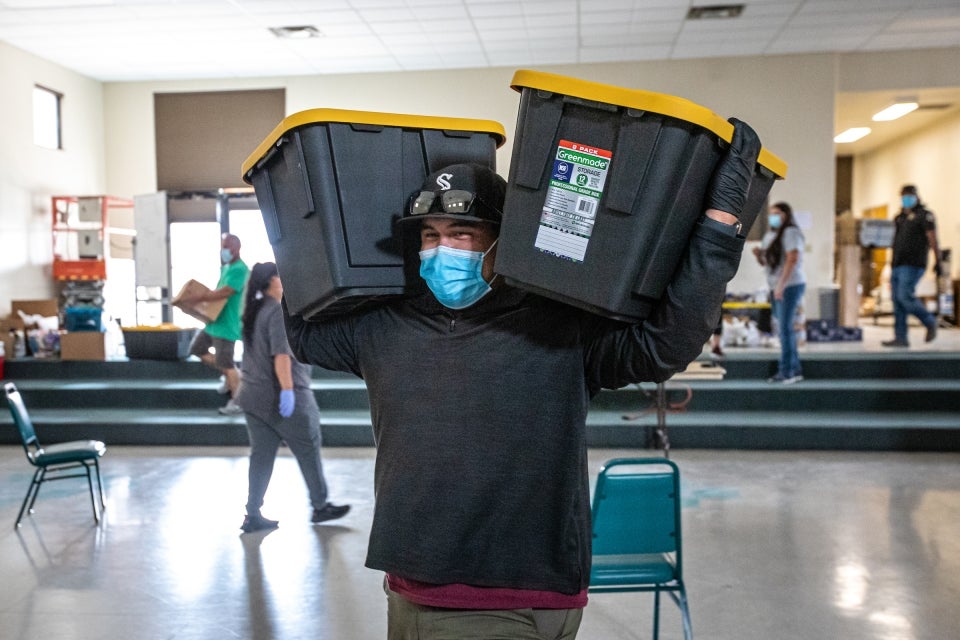 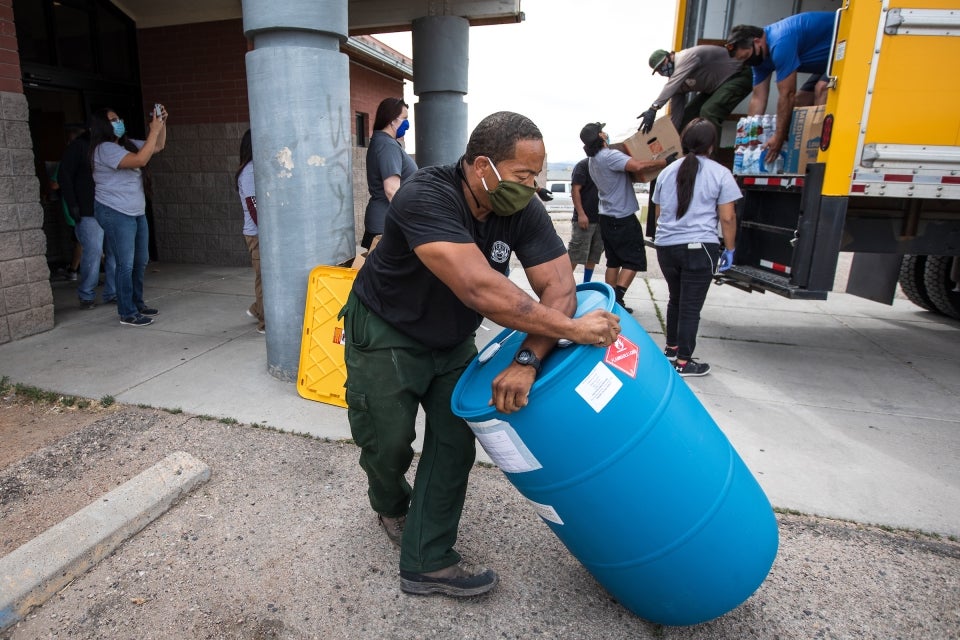 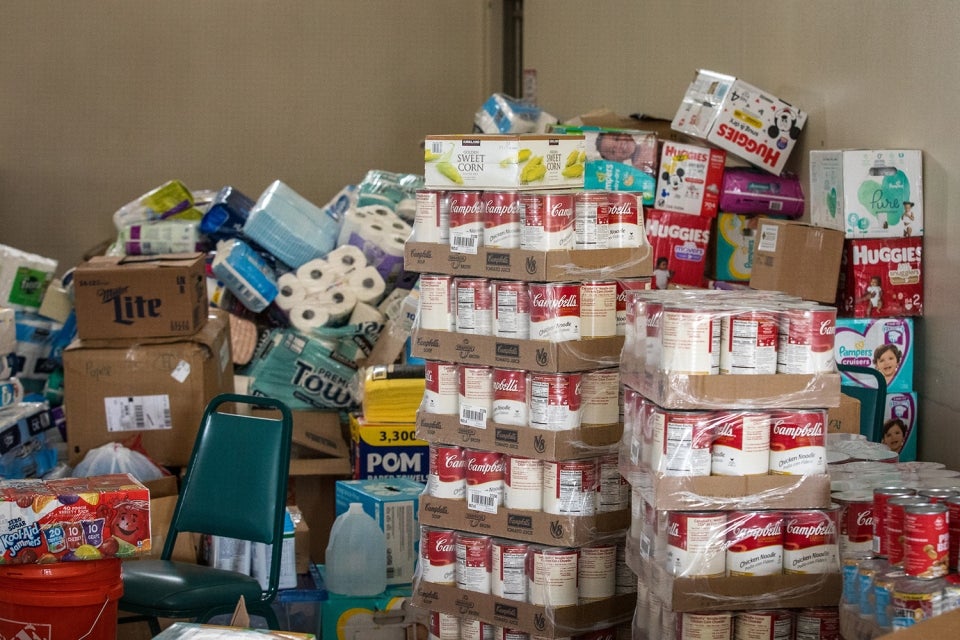 Supplies gathered and distributed by First Peoples' COVID-19 Resource Drive will help protect some of the most high-risk Native American communities. The group will continue its relief efforts as long as the pandemic threat remains.