When Arizona State University Professor and inaugural Arizona Poet Laureate Alberto Ríos wrote his latest collection of poetry, he couldn’t have known that its publication would come during a time of unprecedented crisis and unrest. And yet, the themes in “Not Go Away Is My Name” — the persistence of change, learning when to let go and when to hold on, the necessity of family and community — seem eerily prescient.

“Many of the poems carry an ironic foreshadowing,” he said, but they also “carry a sense of abiding hope.”

In May, Ríos shared a Facebook post announcing the collection’s release and included a link to a Spotify playlist that featured songs he listened to while writing it, something he’d never done before but that seemed a most natural move.

“When I try to articulate what the arts try to do, especially in my capacity as a writer, I often express it this way: Say it, and I will understand it; say it well and I will feel it,” he said. “The arts aim for that second level of human connection.”

Fans of the accomplished poet will have even more meaningful connections to experience when Ríos’ debut fiction novel, “A Good Map of All Things,” is released in September. Both the novel and his latest poetry collection touch on the timeless capacity of love, family and community to help us realize our better selves.

Ríos' first granddaughter, who just turned 18 months old, is a reminder to him of why it’s important to keep hoping and creating.

“She can’t fathom anything that’s going on around her right now since, for now, it’s all about her — immediate food, shelter, love, concern, entertainment, connection. That will soon change,” he said. “… But even that little recognition is so hard to bear as a grandparent, and certainly as a parent. So very simply, I want the world to get better. I am trying to help.”

Continue reading for more of Ríos’ thoughts on poetry and music, poetry versus fiction and the power of telling people’s stories. 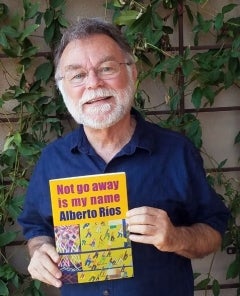 Question: The title of “Not Go Away Is My Name” comes from a line in one of the poems. What is the meaning of it?

Answer: Everything has conspired, whether it’s government policies, changing economics, or now health issues, to try and make people leave the border place and communities I write about; people forced to give away whatever was theirs or is theirs or should be theirs. I think what has always inspired me and has never wavered in my sensibility is a recognition of the strengths of the people I grew up around — their resilience, their ability to say, “I live here. I belong here.” I am here no matter who says otherwise. I am here. Whether it’s DACA students speaking out, or the crying families separated and terrorized by ICE raids, or life-altering crime — in the midst of all these things, I am so struck by the people who say, “I live here. I belong here.” Community speaks to time as well as geography, to history and future as much as today, and saying “I will not go away” means something resonant and powerful, something stronger than immediate uncertainties.

Q: With the announcement of the publication of “Not Go Away,” you also shared a playlist of songs you listened to while writing the poems. Is this the first time you’ve done something like this?

A: It is, indeed, the first time I’ve done this. I was teaching my course on magical realism for part of the time I was writing the poems for the book, and for that class I always listen to so many of the songs I shared. They help me to remember as well that my father used to sing them around the house, and later my mother-in-law. The list would have been much longer if I thought I could ask for more of everyone’s time.

Q: Do you think poetry and music have a special relationship?

A: Writing is movement and music is, too — and they converge surprisingly often. Music moves the body while writing moves the mind. In this sense, they are inextricably linked. Gabriel García Márquez, when he was writing “One Hundred Years of Solitude,” listened to three records incessantly — DebussyClaude Debussy was a French composer of the late 19th and early 20th centuries known for his rejection of Wagner’s classical German musical tradition., BartókBéla Viktor János Bartók was a Hungarian composer, pianist and ethnomusicologist. He is considered one of the most important composers of the 20th century. and the Beatles’ “A Hard Day’s Night”. This never fails to make me smile. The deep, resonant, classical backgrounds make sense — but so does the occasionally wild, out-of-turn, loud-for-the-sake-of-loud. Music, finally, speaks to us, and so often as writers we simply try to speak back, perhaps unconsciously competitive, trying to give back as good as we got.

Q: In her review of the collection, Naomi Shihab Nye from the New York Times said it is “a pay-better-attention book, for all human beings who embrace one another, or think they related to only a few.” That message seems especially poignant at this moment in time. What was your inspiration when you wrote it, and how do you think it applies to the challenges we are all facing during this time of crisis?

A: The pandemic, of course, wasn’t in evidence when I was writing the book, so that many of the poems carry an ironic foreshadowing. I have one poem, for example, called “Don’t Go into the Library.” It seems perfectly tuned to our social distancing, but in fact the poem means quite the opposite. Aside from the immediate comparisons to what’s going on right now, however, so many of the poems carry a sense of abiding hope. Health is one problem — a big one right now — as is the economy, but we still have so many others to deal with. The poems in this book remember the greater world, and so often suggest our better selves as the real solutions — our actual better selves and not simply the empty rhetoric of good.

Q: You have another book coming out in September, a work of fiction titled “A Good Map of All Things.” How is writing fiction different from writing poetry? How is it similar? Which do you prefer?

A: In truth, all my writing is poetry. Sometimes, it just takes longer to tell a thing. While that oversimplifies my approach to fiction writing, I’m not sure it’s at all inaccurate. I don’t write with any plot in mind, instead letting what I just wrote lead me to whatever follows. So much of my poetry works exactly the same way. That said, whatever I choose in the crucial moment to write next is, in some real way, the summation of me — everything I’ve experienced, dreamed, wanted, done and so on, so that whatever comes into that moment of connection is something only I could have written. When I’m about to write a next line, however innocuous, my whole life comes into play, whether fiction or poetry.

Q: Both “Not Go Away” and “A Good Map” explore themes of family, love and community in the lives of people in the Sonoran Desert. Why are these important stories to tell?

A: It’s first important to understand that community is something that stretches over time, not just distance. It is far more dimensional than a pinpoint on a map. It has a yesterday and a tomorrow, an up and a down, a palette of particular colors, an orchestra of organic sounds. These are the stories that were here before us and which will go on long after us, no matter what hubris we might bring to the present day. I think of remembering as a slingshot, a way to explain that the way to go forward is so often to go backward first. If you hold a slingshot, you know what that means. Engaging the slingshot, we go backward and, yes, it hurts, there’s stress, your muscles might ache — but when we let go, we fly so much farther and move so much faster than we would have otherwise. Telling people’s stories, remembering a place’s stories, these are all a way to move forward in a more affirming, positive and meaningfully educated way.

Q: How does art help us cope and give us hope in times of crisis?

A: We might understand that a dictionary is efficient, holding all the words in a language, but a poem is effective, using only a few. We don’t need all the words in the world — we simply need the right ones, thoughtfully sorted. Saying something well is an art, a practice, a celebration of moment, not simply a noting or listing of a moment’s passing. Right now, in this time of crisis, I think meaning — that words actually mean what they say they do — is what we’re listening for. ASU experts on the economy, anxiety, tourism and more share their insights in a new video series on how the COVID-19 pandemic is affecting a variety of aspects of our lives.

All videos produced by Deanna Dent/Media Relations and Strategic Communications