Envisioning the future of space

The 60 people sitting in an Arizona State University conference room in January 2017 had virtually nothing in common. There were theater majors and scientists; sophomores and school deans; local residents; and private-sector employees.

A passion for space — and planetary scientist Lindy Elkins-Tanton — brought them together.

“We brainstormed the biggest questions we have to solve that would have a positive effect on humans’ interplanetary future,” Elkins-Tanton says. “These are not like the sort of things you could do for a thesis. Imagine throwing a javelin over a hill and trying to run to catch up with it.”

On that day, the Interplanetary Initiative was born.

And for the past two years with Elkins-Tanton at the helm, the initiative has been partnering students and faculty members of all disciplines to examine some of the most complex, space-related questions society faces — with the help of small amounts of university seed money.

The projects include a card game called “Port of Mars” that examines the best way to sustain healthy communities in space, and the Interplanetary Podcast that aims to have public conversations about space while also highlighting the work done at ASU.

It all comes at an important time in space exploration, as the U.S. races toward some of the most complex human missions to date, including a long-term return to the moon and a potential mission to Mars.

“We want people who will take the first steps to solve something that’s unsolved,” Elkins-Tanton says. 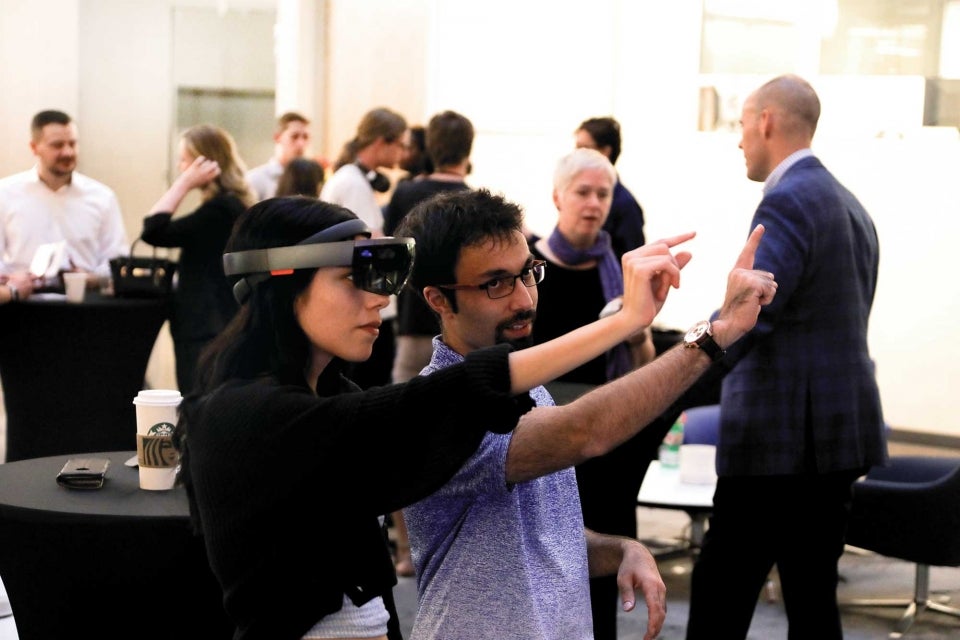 Lindy Elkins-Tanton seeks a team of people who are "synergistic and respectful and integrated and diverse" — including students. Photo by William Campbell/ASU

January 2017 marked a busy month for Elkins-Tanton. Four days into the new year, she got a phone call at 5:30 a.m. — a phone call she had been waiting six years to receive.

NASA delivered the news it was funding her Psyche project, set to explore a metal asteroid orbiting the sun between Mars and Jupiter.

“We were the underdogs by far,” Elkins-Tanton says.

The Psyche spacecraft is scheduled to launch in 2022 and will arrive in 2026. It will spend 21 months orbiting the asteroid, mapping it and studying its properties. The mission team seeks to determine whether Psyche is the core of an early planet and whether it formed in similar ways to the Earth's core.

In the days following NASA’s phone call, Elkins-Tanton started building the Interplanetary Initiative with its first meeting. She became managing director and co-chair of the initiative that day, though she had been approached about starting the program months earlier by ASU President Michael M. Crow.

Elkins-Tanton originally joined ASU in 2014 as director of the School of Earth and Space Exploration following a stint as director at the Carnegie Institution for Science’s Department of Terrestrial Magnetism. Before that, she spent time working at both the Massachusetts Institute of Technology and Brown University.

Then came the Interplanetary Initiative. In Crow’s eyes, it was a means of bringing people of all disciplines together to solve a problem, which resonated with Elkins-Tanton.

“I’d been in search of a place where people were connected intensely and made things that were impossible as just an individual,” she says. “I think of the Interplanetary Initiative as a pilot for what future universities could be. What we’re trying to do here is reinvent the way research teams are built and the way education is done.”

Anyone can participate, regardless of their major or involvement at the school. The individuals who show up brainstorm the questions they believe need to be answered to improve humankind’s relationship with space exploration.

The group votes on the top 10 or so ideas, and then the members divide into teams based on interest. At that point, the university hands out seed money — about $10,000 or so — to each of the top ideas.

The pilot teams are composed of faculty, staff, students and external partners, who all bring their individual and diverse expertise to the table.

That includes Kevin Hubbard, a graduate associate in ASU’s School of Earth and Space Exploration who was pursuing a PhD in politics in spring 2017 when he happened upon the initiative. He was enjoying political science, he says, but he was looking for something new and exciting to be the subject of his dissertation. He decided to focus his initiative-based research on space policy — specifically, how to manage conduct on the lunar surface.

“We don’t want to ruin the place that we plan to live on in the future,” he says.

Hubbard is examining the policy around mining the seabed in the Pacific Ocean, and how that could apply to space. Space is a harsh environment like the sea, he adds, and no nation-state has exclusive rights to the area.

It’s a timely topic with NASA planning a return to the moon for the first time since 1972 with the hope of humans staying there for an extended period. The Artemis program plans to land the first woman and next man on the moon by 2024, but that’s only the start.

“NASA’s trying to make a sustainable presence on the moon,” Elkins-Tanton says. 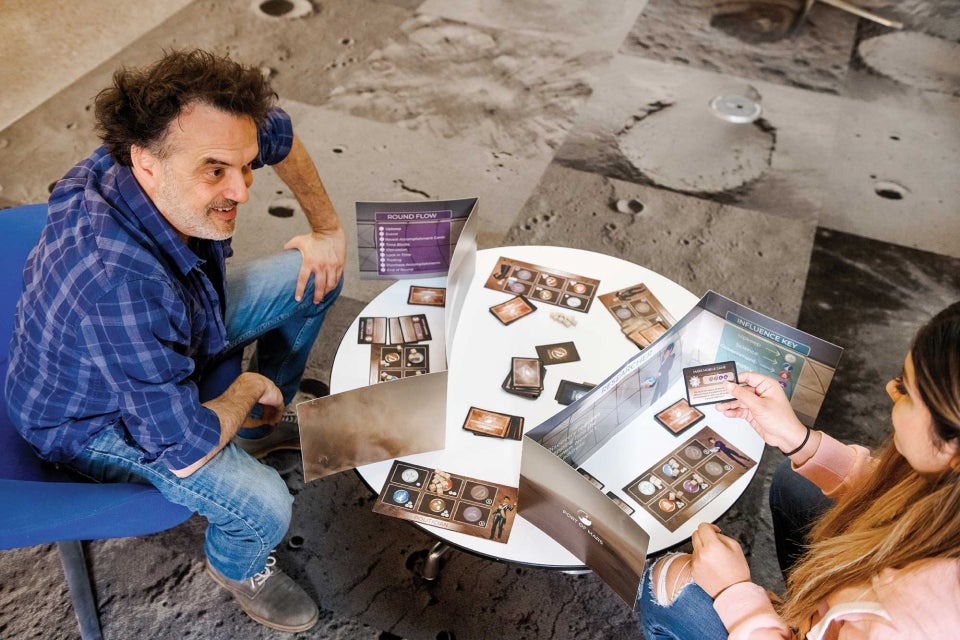 Lance Gharavi teaches Anissa Flores to play Port of Mars, a card game developed as part of the Interplanetary Initiative. It uses play to examine how people might socially respond to living on Mars, including a no-win scenario. Photo by Jarod Opperman/ASU

Can humans adapt to space?

That’s one of the big questions the Interplanetary Initiative is trying to understand and answer. For Artemis, the initiative is partnering with private companies and research groups working with NASA on specific aspects of engineering and science.

“We’re also working with NASA to help them create information clearinghouses to fill in the gaps of knowledge we need to make it to Artemis,” Elkins-Tanton says.

Meanwhile, about 120 individuals, including faculty members and students, are participating in 13 active projects at the initiative, she says.

One is the Port of Mars card game, launched in 2016. It examines how people might socially respond to living on Mars. Players participate on teams, and each round of the game is monitored by an ASU volunteer. They then use how players respond to conflict and morality questions to determine how a Mars colony might work. Team members presented at the Broto conference on art and climate change held in Massachusetts in May 2019 and are working to make the game digital.

“Port of Mars is a rehearsal for the future,” says Lance Gharavi, project lead and an associate professor in the School of Film, Dance and Theatre, “a social science experiment cosplaying as a game … how do we make sure they won’t tear each other apart?”

The initiative’s project on “Five Senses in Space” is inventing a “smell engine” that will use haptic, auditory and visual systems with virtual reality to create a holodeck-like experience of space here on Earth. It also could be used in the reverse, providing an Earth-like experience for astronauts on long-duration space missions. They’re also building a simulated Martian habitat.

After receiving initial seed money from the university, the project last year had three student payloads launched into space on Blue Origin’s New Shepard rocket. Students currently are analyzing the data from the payloads, which include instruments built to capture elements of the senses in space.

Students plan to use this data on Earth to convey how space impacts the senses.

Other Interplanetary Initiative projects include:

“By working toward the vision of an optimistic human space future, we make ourselves better here on Earth and we make our life here on Earth better,” Elkins-Tanton says. “What we’re trying to do with Interplanetary Initiative is speed up that process for everyone.”

The Interplanetary Initiative is partially supported by Arizona’s Technology and Research Initiative Fund, which has enabled thousands of scientific discoveries, more than 800 patents, 280 new startup companies and hands-on training for approximately 33,000 students across Arizona’s universities. Publicly supported through voter approval, TRIF is an essential resource for growing Arizona’s economy and providing opportunities for Arizona residents to work, learn and thrive.

Top photo: Lindy Elkins-Tanton, managing director of ASU’s Interplanetary Initiative, introduces one of her missions: “I hope we train a whole group of people — these great young minds — to go off and make the world better where they end up.” Photo by Charlie Leight/ASU Now. Story by Alex Stuckey. This story appears in the winter 2020 issue of ASU Thrive magazine.

All jobs require critical thinking skills that allow us to assess situations, projects and directives, make informed judgments and pivot as necessary when changing circumstances and priorities dictate. In today’s workplace climate, the term "adaptability" takes on new meaning. Jobs and career paths are in a state of flux. This presents opportunities for dynamic growth and advancement, particular...

All jobs require critical thinking skills that allow us to assess situations, projects and directives, make informed judgments and pivot as necessary when changing circumstances and priorities dictate. In today’s workplace climate, the term "adaptability" takes on new meaning. Jobs and career paths are in a state of flux. This presents opportunities for dynamic growth and advancement, particularly if you can demonstrate to a current or potential employer your understanding of this changing paradigm.

As an adviser to the White House American AI and Industries of the Future initiatives, I am innately aware of the nation’s perception of the advancement of automation and its potential impact on the ways we live, learn and work. With the recent, rapid advances in technology and artificial intelligence (AI), we’re all looking for ways to position ourselves to be successful in the future of work. I encourage an attitude of optimism, as we collectively embrace a world in which machines and humans work together to accomplish things neither could do alone. It’s imperative that as lifelong learners, we continually strive to adapt to evolving workplace dynamics in the following ways: Develop and employ an entrepreneurial mindset. This doesn’t always mean you have to launch your own business, but rather, it’s a matter of finding ways to innovate, to grow, take calculated risks, and expand and excel in your profession.

Be aware of factors that stand to change the fundamentals of the way you work. Is automation playing an increasing role in how your company operates? Are new hires expected to have particular skill sets that you don’t have? Pay attention to what’s coming through the pipeline, and be proactive in adapting as necessary to ensure you remain relevant.

Be enthusiastically prepared to evolve with your company. This could mean requesting mentoring to come quickly up to speed on institutional knowledge, cross-training to learn the needs and operations of other departments, or upskilling and reskilling as necessary to advance and thrive in your company.

Expect and embrace change and prepare accordingly. Develop not only your professional abilities, but other skills, like critical thinking, empathy and creativity. Being well-versed and well-rounded in your mindsets will ensure you are an asset to your employer (or employers) throughout the course of your career.

As the future of work continues to evolve, corporations will be drawn to lifelong master learners who possess an innovative, creative mindset. As such, being adaptable in today’s workplace includes recognizing and accepting that change is continuous. Choose to go with changing the tide rather than fight against it.

This story appears in the winter 2020 issue of ASU Thrive magazine.